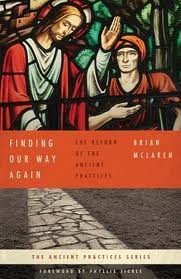 My Aunty Pauline and my Uncle Solomon are two very different people who have very little in common. They are so different, I can’t imagine them hanging out if Pauline weren’t married to Solomon’s brother. But there is one thing they have shared in common for as long as I can remember–their practice of fasting. It’s something I’ve never understood. I’d watch them Sabbath afternoons gathered with the rest of our large extended family at the mother’s home, around the table piled high with food and I’d marvel at how they were never tempted by the deliciousness around them. (Of course, I never wondered enough to give up Sabbath Chicken Biryani to try their ritual myself.)

I’ve questioned them about their fasting and while I respected their personal reasons, their reasons weren’t reason enough for me to try it. McLaren’s advocacy of fasting, on the other hand, is supported by universal arguments and biblical examples. I find him objectively convincing and almost want to try it–sometime in the future.

Until McLaren’s book, the only window I had to fasting and Christianity was my uncle and my aunt. Until McLaren, I categorized rituals and practices like fasting and meditation to monastic living and Asian culture. Having grown up in India, fasting and meditation was for everyone else but the Christian–It was something the Muslim, the Hindu and the Buddhist did, and seemed like a penance of some sort, a self-deprivation with a secret agenda. There was something strange and mystical and zen-like about it all. But after reading this book, I feel I should rethink and study the topic from a more biblical perspective.

McLaren harnesses the history and the common themes shared by Christianity, Islam and Judaism to challenge the reader to a fresh, new perspective of community. His passion for evangelism seems to fuel his appeal to Christians to embrace those who seem radically different from us on the surface. I can see how certain portions of his book, combined with his well-publicized practice of celebrating and sharing in the fast and the feast of Ramadan with his Muslim friends, could infuriate many Christians. Yet, I can’t help but feel that his approach of embracing the brotherhood in all men is reflective of Jesus dining with publicans and drinking from Samaritan wells.

I’m not on board with everything in the book, but I do agree with the importance of finding commonality with people of different faiths, and I do see the sense in how discipline and self-denial can make us more aware of our humanness and more sensitive to the needs of others. While the book has certainly given me a lot to think about, I have to admit I’m still a long ways off from giving up a meal, let alone three, anytime soon.

(I received this book free from Thomas Nelson. I was not required to write a positive review. The opinions I have expressed are my own.)

This site uses Akismet to reduce spam. Learn how your comment data is processed.

Easier said than done 😉
There aren’t many books that I read over. This one I’ve reread several times. @philipyanceyofficial’s raw, real look at my relationship with God makes me realize just how much I undervalue its potential.
Alice Steinbach’s book, Without Reservations: Travels of an Independent Woman, is one I read in morsels. I save legs of her journey for mundane, boring days. #bookstagram #booklover #books #travelbook
A great story that affirms strength and resilience in the face of adversity. #bookstagram #books #quotes
“Be energetic in your life of salvation, reverent and sensitive before God. That energy is God’s energy, an energy deep within you, God himself willing and working at what will give him the most pleasure” (Phil 2:13, The Message). #quotes #bibleverse #livingyourfaith
Loading Comments...
%d bloggers like this: